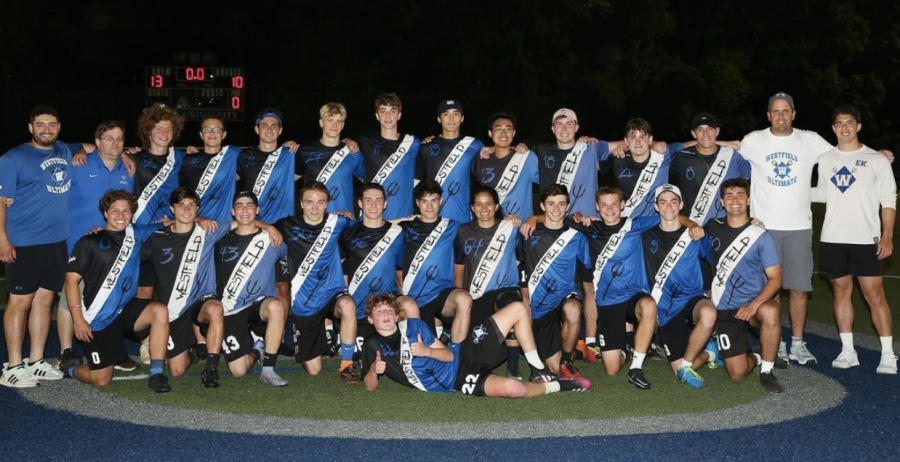 Sunlight turned to shadow on a warm spring night as Westfield and Columbia prepared to face off in the Ultimate Frisbee state title game. The game would pit two dynastic Ultimate programs against each other, powerhouses that have combined to hold a monopoly over the New Jersey Ultimate state title since the turn of the century.

The pair has contested in each of the last three state title games. Bizarrely, Columbia prevailed by the same score, 13-12, in all three previous meetings.

There was another narrative floating around the game. Westfield, after what head coach Ryan Belline called “a rough start to our season” that resulted in a 4-6 record, had flipped a switch and won 16 games in a row.

Westfield played fast and fluidly to start the game, storming down the field in 30 seconds on its opening possession to take a 1-0 lead. Columbia elected a more methodical approach, which proved effective as the Cougars knotted up the score at 1-1 on their first possession.

Those opening possessions set the tone of the game. One team would briefly stick its nose ahead, then the other would reel in its opponent. So it went, the teams throwing punches and counterpunches but staying within one point of each other.

Westfield’s second goal came when Ethan Stack found Nick Deis in the endzone. Stack, a junior who wears his hair in a spiffy blue headband, is the point guard of this offense. He works alongside senior Eric Harnisher and junior Brendan Percival. All three are dependable players, even-keeled on the field and liable to produce magic.

And there, with Westfield down 3-2, Percival did just that. Recognizing a vulnerable spot in Columbia’s defense, Percival launched a deep backhand into Schwartz’s path. Schwartz timed his leap perfectly and snatched the disk over a defender’s head, tying the game at 3-3. This was a new tactic, different from the short passing that gave Westfield its first two points. At times Westfield’s most effective form of offense was also the most simple: Chuck the disk downfield and let your cutters make an athletic play.

Schwartz’s acrobatics delighted many fans. “It’s been a pretty electric first half,” said WHS junior Cameron Linenberg, a broad smile on his face.

Columbia sallied downfield on the next possession to retake the lead, but the Percival-Schwartz connection reared its head a second time moments later. Percival whipped another backhand downfield; Schwartz again boxed out his opponent to make a grab, leaving Westfield on the doorstep. The Blue Devils punched in a moment later.

Schwartz wasn’t the only Westfield cutter streaking downfield to complete long passes. Ethan Roitman was doing the same thing, and Westfield’s handlers clicked into a smooth rhythm, tossing passes the length of the field to flying receivers.

On the other side of the field, Schwartz’s bounciness helped him thwart endzone-bound Columbia passes.

The Cougars fought hard. Led by Nick Alexander, a junior with a mane of blond hair and a penchant for laying out to break up Westfield passes, Columbia hung around. This was a game of top quality. Errors were rare; superlative play was the norm. Westfield’s best against Columbia’s best. What a state championship should be.

It’s a mesmerizing dance, this sport. The frisbee, gliding through the air, turns revolution after revolution as the players scurry beneath it. There’s a moment on every play, between the throw and the catch, and specifically on long passes, when the frisbee floats softly through the air. Hungry eyes follow it, waiting to see where the disc might end up. A rumble of anticipation builds from the onlookers, and for a moment there is nothing but a spinning disc and two high-school kids chasing it down.

The rhythm of the game is captivating, certainly to the sea of fans filling the stands to the brim. Drew University’s Ranger Stadium, capacity 1,200, barely had enough seats for the rapt crowd. But many fans didn’t use the seats—they hung over the railing, trying to get as close to the action as possible.

At halftime, those fans, many uninitiated in the world of Ultimate, expressed their excitement at watching such a great game.

At some point in the beginning of the second half, the lights flicked on, adding luster to a spectacle that provided plenty on its own.

The teams traded points coming out of halftime. Columbia gained an 8-7 advantage, the third lead change of the game. There was a fourth lead change, however, and it would be the last.

It’s said the tide can turn quickly in Ultimate; this was a flash flood.

First there was a Westfield point to tie things up, then another to wrest back the lead. Next came Westfield’s Aidan Crane, sprinting 40 yards downfield, like he was at the NFL Combine, to  knock down a Columbia pass. Defense turned to offense a moment later: Percival launched the disc downfield to Harnisher, who tracked it down and made an arms-outstretched grab on the goal line.

One timeout and two short passes later, Leo Schwartz stood in the endzone with Westfield’s 10th point of the night and the first two-point buffer either team had built.

The lead swelled to three when senior Jakob Ayala laid out to snag a pass from fellow senior Ben Spergel. That capped a four-point run and put Westfield firmly in the driver’s seat.

“That was really the game-changer,” said Belline, speaking after the game. “We scored four in a row using a heavy sophomore line twice, which really brought us a lot of energy on defense.”

But the job was not yet done.

A chill set in as the clock ticked below 18 minutes, portending the two-point run Columbia embarked on to whittle the gap to one point with just over 10 minutes to play. Westfield composed itself and marched to the doorstep, but Ayala stumbled and twisted his ankle reaching for a Harnisher pass. Columbia regained possession with a one-point deficit and minutes to play. In a bid to tie the game, Columbia took a shot at the endzone, but it was denied by Harnisher.

The Blue Devils tacked on another point, bringing their lead to two points—an insurmountable gap for the fading Cougars. Westfield fans rattled the stands, exuberant, as the clock wound below one minute.

“Nothing but pure joy and fulfillment,” said Stack.

Westfield celebrated, the demons of the past three years exorcized. There was the customary field-storming, the posing for pictures, the handshake line.

It was a beatific celebration, but not one characterized by the shocked elation often apparent in title-winning situations. This was not a surprise victory, nor was it the realization of a far-fetched dream.

This was Westfield, the No. 1 team in the state, playing out a script it had laid for itself.