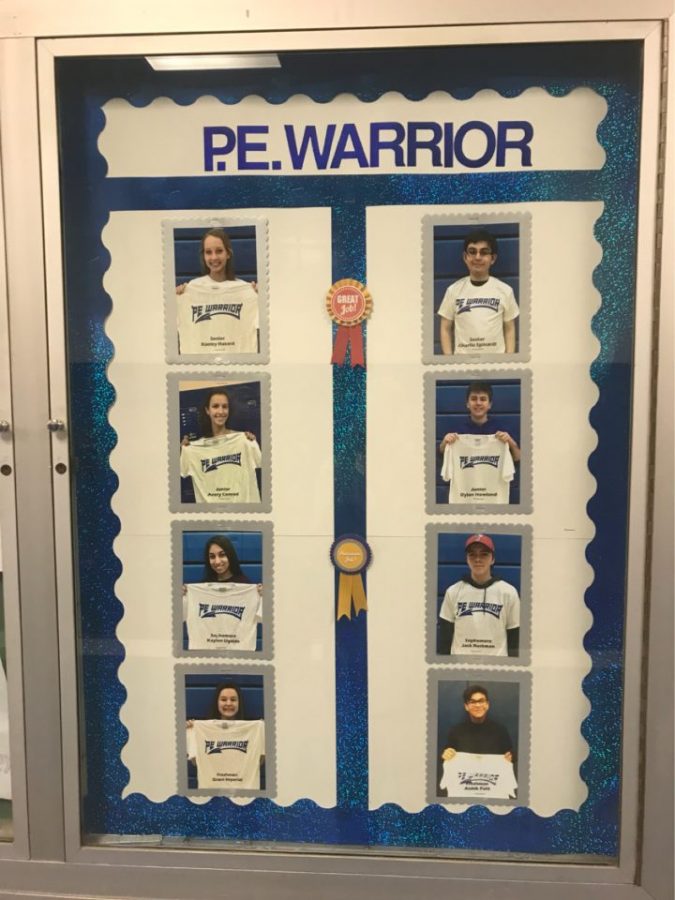 Westfield High’s “tradition of excellence” is not only apparent in the classroom and on sports teams—it is also occasionally spotlighted during gym class. Yes, WHS does honor students for winning a volleyball game in sixth period or putting the soccer balls back in the shed. At the end of each month, eight WHS students are awarded the prestigious title of PE Warrior.

The PE Warrior program was instituted in 2014 by Physical Education Teacher Mr. Ralph Corey to honor students of each grade level for their efforts in gym.

“We felt that it was important to recognize those students who normally don’t get recognized in academics or athletics,” Corey said.

Because the physical education curriculum includes various units, students are given many opportunities to showcase their skills and efforts to fit the PE Warrior profile. For Physical Education Teacher Ms. Lauren Hauser, it’s not about being the most athletic. Instead, being a team player is hugely important. Helping clean and set up, and being active in class, are crucial characteristics of a PE Warrior.

Another motive for commencing the program was to set a goal for students to be more engaged in class. The opportunity to win an award boosts students’ efforts and participation, while adding more competition.

“Kids who are motivated to receive awards will absolutely try harder and encompass more of their peers in group or teamwork, making phys ed as a whole more productive,” Hauser said.

The extra incentive to win PE Warrior has motivated junior Alan Souza. It is clear his hard work has paid off, as Souza won the award during both his freshman and junior years.

“I work really hard in gym,” Souza said. “I came in during my off day just to play with my team for the volleyball championship.”

Like Souza, any student can win more than once; the program permits a student to win once a year in high school. And multiple wins can be beneficial. The Phys Ed department grants a graduating senior a scholarship that can go towards the student’s college education. Thus, winning the award more than once increases the student’s odds of receiving the scholarship.

Not only can winning PE Warrior lead to the scholarship, but getting nominations throughout high school can do the same as well. During the monthly department meetings, the 11 gym teachers sit down and nominate students from each grade level who they think possess the traits of a PE Warrior. Teachers vote and whichever students have the most votes win the award.

Here at WHS, being a varsity athlete or getting great grades are not the only achievements that win awards; excellence is everywhere, even in the gym.