One hit wonders: Where are they now 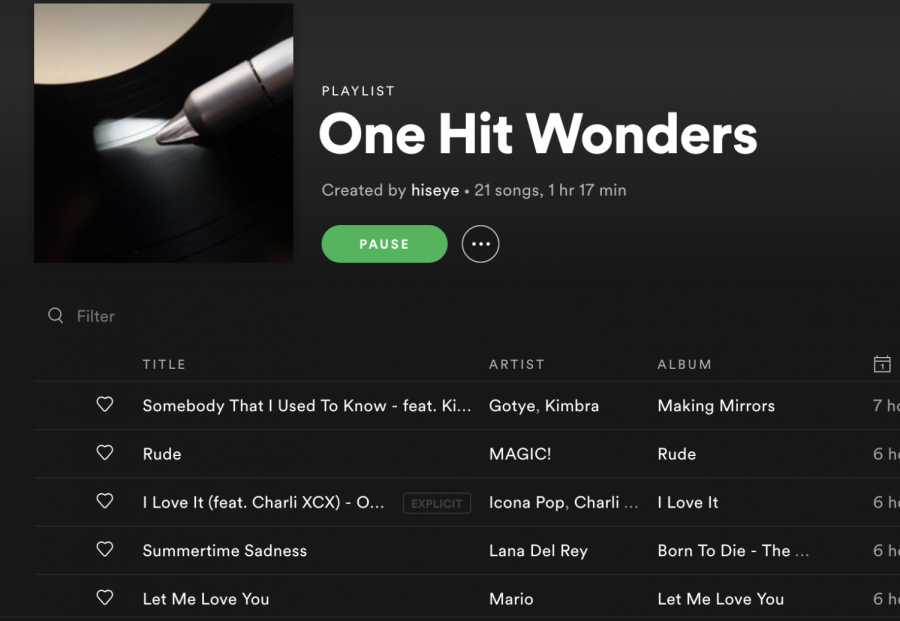 The music industry is constantly exposing the world to new artists every day. Some make it while others fail to ever gain notoriety. Somewhere in the middle are the one hit wonders: the artists that have produced a real bop but now their name makes you think, “Oh yeah, what ever happened to them?” While they may have dropped from the top pop charts, see below to reminisce on our childhood jams—and discover where they’ve gone since the iconic era of 2000s music.

Gotye- “Somebody That I Used To Know”

After producing his hit “Somebody That I Used to Know” ft. Kimbra, Wally De Backer, better known by his stage name Gotye, pretty much vanished. Since then, Gotye has released the single “Ghosts” in 2013 but otherwise has disappeared from the music scene. However, further investigation reveals that Gotye is still an active musician, performing with his band The Basics. The band has released several albums, both before and after “Somebody That I Used to Know” came out. In 2017, De Backer also launched a new record label called Forgotten Futures in memory of his friend and fellow musician Jean-Jacques Perrey.

Magic!’s hit “Rude” was the bop of the summer when it came out in 2014. Now, four years later, Magic! has been unable to produce another song of similar magnitude. While the group has come out with two albums after “Rude”, the hit remains at the top of their profile on Spotify with over 500 million plays. Their latest release is the album “Expectations,” which came out this year.

Icona Pop, a duo composed of Caroline Hjelt and Aino Jawo, gained popularity in 2013 for their hit “I Love It” featuring Charli XCX. The pair’s latest EP, Så mycket bättre 2017 – Tolkningarna, was released in 2017 and they posted on social media about working on a new album. They also voiced Satin and Chenille in the animated film Trolls in 2016.

Lana Del Rey released her infamous seasonal bop “Summertime Sadness” in 2012, before disappearing from the pop music charts. Del Rey has hardly vanished from the music scene, however as she released two singles in Sept. 2018 called “Venice Bitch” and “Mariners Apartment Complex” that have around ten to twenty million listens on Spotify, and she released her album Lust for Life in 2017. Her two most recent singles are part of the album Del Rey promises for 2019, called Norman F**king Rockwell

Mario- “Let Me Love You”

“Let Me Love You” by Mario hit the top 100 charts in 2004. But, while the hit left early 2000s kids craving more, the artist dropped off the face of the musical market after 2009. Mario struggled over the next few years with his career, planning albums but never releasing them due to record label changes and music that did not feel authentic. Following a few years of spontaneously produced singles, Mario released his 2018 soundtrack Dancing Shadows, which debuted at number one on the iTunes R&B charts.

No early 2000s kid could deny the magic that was the 2009 pop hit “Fireflies” by Owl City, also known as artist Adam Young. But while the artist released three albums in the six years after Ocean Eyes, no song garnered as much attention on the pop music charts as the 2009 track. His collaboration with Carly Rae Jepsen on “Good Time” debuted at number 32 on the U.S. Pop Songs chart and number 18 on the Billboard Hot 100 for the week of July 4, 2012 –  but still, their most iconic and famous single remains “Fireflies.” Young also recently released another album, Cinematic, in 2018.

Rixton- “Me and My Broken Heart”

“Me and My Broken Heart” was every girl’s heartbreak anthem when it debuted in 2014, but afterwards, their hearts were broken by the disappearance of Rixton itself. The band has not posted anything on its Instagram since Dec. 2, 2016, and Jake Roche, the lead singer, has only posted once on his Instagram (@jake_rixton) which was in Sept. 2016. Let The Road was their only full album to actually be released, created in 2015. After, they made remixes and acoustic versions of the songs on those albums, and one single called “Sorry to Interrupt”—but all production stopped in 2015. There is no information detailing a formal breakup of the band or an explanation of their disappearance.

Ylvis- “What Does the Fox Say”

Ylvis, a Norwegian duo of brothers, shocked the internet when they released their wacky music video to their original song “What Does the Fox Say?” in 2013. The song was written for their talk show, but it is not the only song the pair has written. Their Spotify includes an album called Volume 1 released in 2014 along with a variety of singles. In November 2017, they started a new show called “Stories From Norway.” It is unknown whether or not they ever answered the question posed in their one hit: what does the fox say? Joff-tchoff-tchoffo-tchoffo-tchoff!?

This uncle-nephew pair was making waves on the electronic dance music scene in 2011 with their hits “Party Rock Anthem” and “Sexy and I Know It.” They have not released any music since, but the following year they accompanied Madonna on the stage during the Super Bowl XLVI halftime show. Later in 2012, the pair announced a hiatus, claiming that they wanted to focus on their solo careers.

Alexandra Stan released “Mr. Saxobeat” in 2011 on her album Saxobeats, a collection of jazzy party bops. Since then, she has been hard at work on three more albums, the most recent being Mami in 2018 in addition to numerous singles. In 2016, she temporarily joined the Romanian group G Girls, which produced hits like “Call the Police.” She made it onto the U.S. Dance Club Song charts again in 2018 when she was featured on Manuel Riva’s hit “Miami.”

When Iyaz came out with his song “Replay” in 2009, it was a melody in our heads that we couldn’t keep out. He followed it up with his So Big EP and “Solo” in 2010, and has also collaborated with big names like Travie McCoy, Big Time Rush, Demi Lovato, and Akon. Along with a smattering of other singles, this year he released “Destiny” with Kabaka Pyramid.

“Dynamite” was the key component to any elementary school or middle school dance following its release in 2009. Cruz, however, has been absent from not only the school dance scene, but the music scene in general. He has not released a full album since 2011, but has released a few singles, his most recent being “Me On You” in 2018.

Mike Posner- “Cooler Than Me”

Posner hit the peak of his early career with his track “Cooler Than Me” in 2010, on his album 31 Minutes to Takeoff. After a five-year hiatus from the music industry, Posner returned with his album, At Night, Alone. in 2016, filled with songs of a more acoustic and natural feel. Posner once again gained popularity in the pop music world with the Seeb Remix of his track off this album, “I Took A Pill In Ibiza.” Since, Posner has composed his most recent album on Spotify, called Tear Drops and Balloons, which, instead of music, features poetry. He also has a recent strong alternative presence with his single “Song About You” released this year.

Willow Smith’s 2010 hit “Whip My Hair” had every little girl (and boy!) letting their hair down and shaking her (and his!) head back and forth in a frenzy. But, for four years after her rocking single, Smith vanished from the musical scene, eventually returning with an EP and two other albums, the most recent being titled The 1st in 2017. Her song “Wait a Minute!” from the 2015 album Ardipithecus is her most-listened-to hit, according to Spotify.

From 2009-2010, Sean Kingston stole the hearts of many adoring fans with his songs “Beautiful Girls” and his collaboration with Justin Bieber on “Eenie Meenie.” However, he was never able to create a track to top those, and now merely produces remixes of his old hits, such as “Fire Burning,” “Beautiful Girls” and “Take You There”—those being his only contributions to Spotify in 2018.

fun., a band composed of Nate Ruess, Andrew Dost, and Jack Antonoff, released their album Some Nights in 2012 and the songs “Some Nights,” “We Are Young” ft.Janelle Monae, and “Carry On” quickly became the songs to sing your heart out to in the shower. Since then, their only release has been the 2014 single “Sight Of The Sun”. Also in 2012, lead singer Ruess was featured in P!nk’s song “Just Give Me a Reason.” In 2015 he released the album Grand Romantic before the band announced in 2015 that they would be breaking up to focus on individual projects. Antonoff has been a key component to the production of multiple big-name albums recently, such as Reputation by Taylor Swift and Melodrama by Lorde.

Ne-Yo released “Let Me Love You” in 2012, but the pop charts certainly did not love him. None of his releases ever lived up to the fame this track did, although he was featured on other songs that topped the charts, such as “Time of Our Lives” by Pitbull. He is also Ne-Yo recently released an album titled Good Man in 2018—and hopefully he will receive some love for this one.

Everyone and their mothers in 2012 knew the song “Gangnam Style” as well as the dance that went with it. The Korean singer behind it, PSY, has come out with tons of music since including “Hangover” featuring Snoop Dogg in 2014, PSY 7th Album in 2015, and PSY 8th 4×2=8 in 2017. His albums feature songs in both Korean and English.

Sara Bareilles burst onto the pop-music scene as a powerful female vocalist in 2007 with her hit “Love Song”, and continued her reputation as a force to be reckoned with as she released “Brave” in 2013, topping the charts and inspiring people to belt out those high notes with confidence. In 2015, Bareilles seemingly disappeared from pop music production—but in doing so, she erupted into the Broadway market by writing the music for Waitress, and even starring in it for a short period of time. Bareilles recently announced her upcoming sixth album, and released the first single “Armor” in Oct. 2018.

Check out the full playlist on Spotify below: