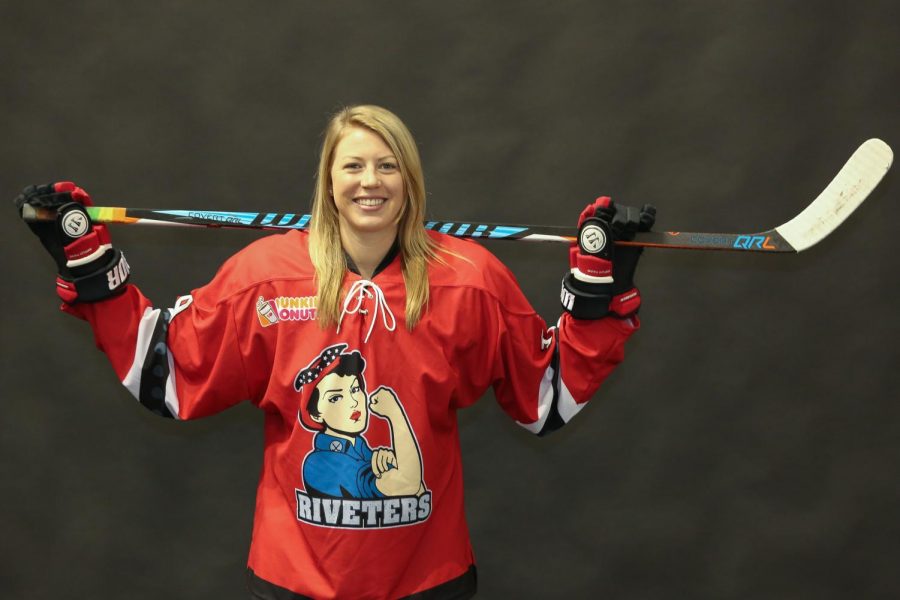 When she was little Rebecca Morse played hockey in the streets of Westfield, now she’s playing in her third season for the National Women’s Hockey League (NWHL).

Currently living in Roselle, Morse plays for the Metropolitan Riveters, based out of Newark. The league started in 2015 and currently has five teams.

She grew up in Westfield and started out playing roller and street hockey with her older brother. When she was eight, Morse asked her dad if she could play ice hockey like her brother and quickly traded her roller skates for ice skates. Up until high school, she played club hockey with the New Jersey Colonials on girls’ teams as a defender.

Morse went to high school at the National Sports Academy (NSA) in Lake Placid, NY. “I was planning on going to Westfield High School and I was going to try and play for the boys’ team and also continue to play for the Colonials,” said Morse. “But I ended up going to a showcase in the end of July [before freshman year]. I got recruited, [so] I made the decision to go and…had a month to pack up all my stuff and say my goodbyes.”

At NSA Morse played in the Junior Women’s Hockey League. According to friars.com, she was captain of her team during her senior year of high school and set the team’s assist record with 61 assists in 71 games that season. She finished her high school career with 60 goals and 160 assists.

It was during her freshman year of high school that Morse began getting recruited to play in college. Morse committed to play D1 hockey at Providence College, and over her college career scored 16 goals and 44 assists, according to friars.com.

Morse stayed at Providence for graduate school and started shifting her life away from hockey and towards a professional career in marketing. After graduating with her MBA she moved back home just as the Riveters changed its location from Brooklyn to Newark.

As she looked for a job she started hearing from old teammates about how much they loved playing for the Riveters. “I said to myself ‘I need to do something … I can’t be home every day applying for jobs. I need a purpose in life,’” and with that Morse decided to start playing again.

Morse joined the NWHL in the 2016-2017 season, playing for the Riveters on the practice squad. During her second season, Morse became a full-fledged player, increasing her ice time as well as her role on the team. That season the Riveters won the Isobel Cup, the championship trophy of the league.

Despite being professional hockey players, Morse and all of her teammates have full-time jobs. Yet she doesn’t see it as a challenge because she couldn’t imagine her life without hockey.  It serves as an escape for Morse and her teammates as they can leave a stressful day of work and channel their aggression on the ice.

Morse said she sometimes has to pinch herself because of how well everything turned out. She’s playing 10-15 miles from where she grew up, her family is in the area, she has a full-time job, and she’s playing at the Prudential Center right next to her beloved Devils.

However, her favorite part of playing in the NWHL is the impact she and the league have had on young female athletes. “It’s amazing to be in that position and to inspire young girls because I know that was something that I was lacking [growing up],” she said.

On Jan. 14th Morse will be leading a girls hockey clinic, sponsored by the Westfield Hockey Club, at the Westfield Rink at Gumbert Park from 5:50 to 6:50 pm. The clinic is open to, and free, for players age 6 to 18. Equipment and minimal experience are required. For more information and how to register email [email protected]