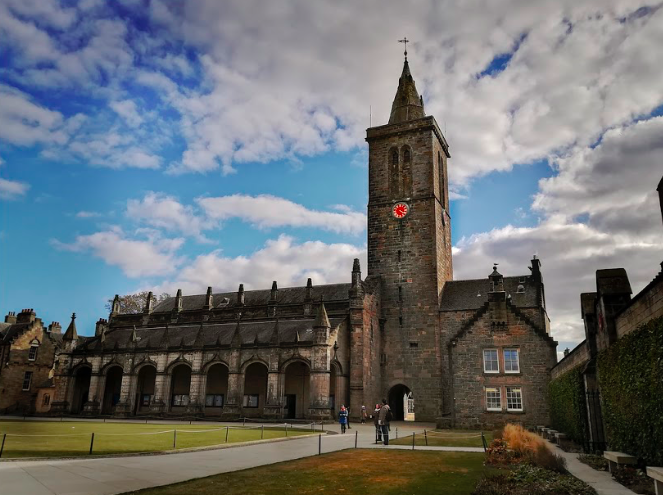 Since I began the process of deciding where to go to college, I knew that I wanted to go somewhere far away. I love Westfield, but I’ve always viewed college as my opportunity to become independent and go places I’ve never been, and if I stayed close to home, I think my opportunities would have been stifled. Originally, I had my sights set on the West Coast, but as soon as I began exploring international options, my mind was made up.

Next year, I will be attending the University of St Andrews in Scotland. During my four-year stay, I plan on double-majoring in Classics and International Relations. While the school itself is highly regarded academically, several additional factors contributed to my decision, many of which are unique to international schools.

Primarily, international colleges, particularly in the U.K., are cheaper than American schools. The average college tuition in the U.K. (in U.S.D.) is $7,400 per year for U.K. and E.U. students, vastly cheaper than the average tuition in the U.S. at $26,000 per year. The fact that I am able to attend college for far less money than what I had anticipated has taken a huge financial weight off of my parents’ shoulders, who also have to support my brother, a junior in college.

Since my tuition will be costing much less than anticipated will also help finance another benefit of going international: travel. I love to travel and think college is the perfect opportunity to do so. At St Andrews, I’ll be an hour flight away from cities like London, Dublin and Amsterdam, and only a two-hour flight from cities like Paris, Berlin and Oslo. In general, it will be much easier and cheaper for me to travel around the globe while living in Europe, thanks to programs like the Europass, a European Union initiative to increase the mobility of citizens in Europe.

I spoke to Caroline Gallagher, a fellow senior who will be attending Trinity College in Dublin in the fall about why she chose to go international as well. Her reasons were very similar to mine: “I always knew that I wanted to study abroad and live overseas at some point,” she said. “So, I figured: why not go abroad all four years? I want to experience new things, and I think living in a different country is a great way to do so.”

The academic structure of U.K. schools is also more appealing to me than the American version. I have always been very strong in English, history and world languages, but have struggled in classes that were more STEM-focused. I was dreading having to take the required math and science classes in college, but that worry faded when I learned about the academic structure at St Andrews. There are no credits—students are only required to take three classes per semester: the two they are majoring in, and one other. As long as a student takes three classes within the faculty of their intended major, the school is satisfied. Case in point: I never have to take another math or science class. As a humanities-focused person, this is a huge relief.

Another factor in my decision was golf. I have played golf for WHS since I was a freshman and I love the sport. I figured that after high school, I would be done with my competitive golf career, since I had no desire to play at the college level and an American school that has an intramural girls golf team is a rare commodity. However, St Andrews is a block away from the Old Course—the most famous golf course in the world—and thus they have an intramural girls golf team! So, thanks to St Andrews, I can still play golf in college without it being too competitive, and I get to play the most famous course in the golf world.

Campus life also played a large role in my decision. I didn’t want to go to a big, sports-heavy school with excessive party culture, but I also didn’t want to go to a school where the only thing students focused on was academics. St Andrews has provided me with a very well-balanced choice. There are several sports teams at St Andrews that are highly-ranked, such as their cricket and polo teams, but the sports culture is not excessive. Academics are taken very seriously, but there is also a thriving social life with 160 different clubs and societies.

Finally, since the drinking age in the U.K. is 18, it seems that not just at St Andrews, but at schools across the U.K., there is not an excessive party culture. Drinking is legal for all students, so most end up going to pubs or having smaller get-togethers, rather than massive parties to drink illegally. For someone who doesn’t like huge crowds or binge-drinking, this is a huge relief.

Arguably the biggest factor in my decision to go international was the diversity of both the students and the faculty. Only 20 percent of the students at St Andrews are American. While there, I’ll get to meet, and even potentially room with, people from all over the world, something I probably wouldn’t get to do at an American school. Thus far, I have connected with students from places like Hong Kong, Norway and Dubai. I’m hopeful that this will allow me to be exposed to different places and cultures that I’ve never encountered before in a small town like Westfield. I think this dynamic will also provide me with a much more global and in-depth view of my chosen major, International Relations.

I know that going so far away for college can seem like a pretty daunting task. I won’t pretend that I’m not nervous about being a continent away from my parents, or having to set up a U.K. bank account and phone plan, or the five-hour time difference, but my anxiety is greatly outweighed by my excitement. I think these four years will really allow me to come into my own as an individual, while also letting me see the world and meet people from every corner of the globe.

I would not have known any of this if I had not decided on a whim to research international schools. So, I encourage everyone who is looking for a unique college experience to consider going international. It will provide you with incredible opportunities that most American schools simply can’t. And, for anyone interested in an ancient, academically rigorous, social (and very cheap) school, look into St Andrews. Once I started looking into it, I knew there was nowhere else I’d rather be.