Trump’s attempt to take down TikTok gets thwarted temporarily 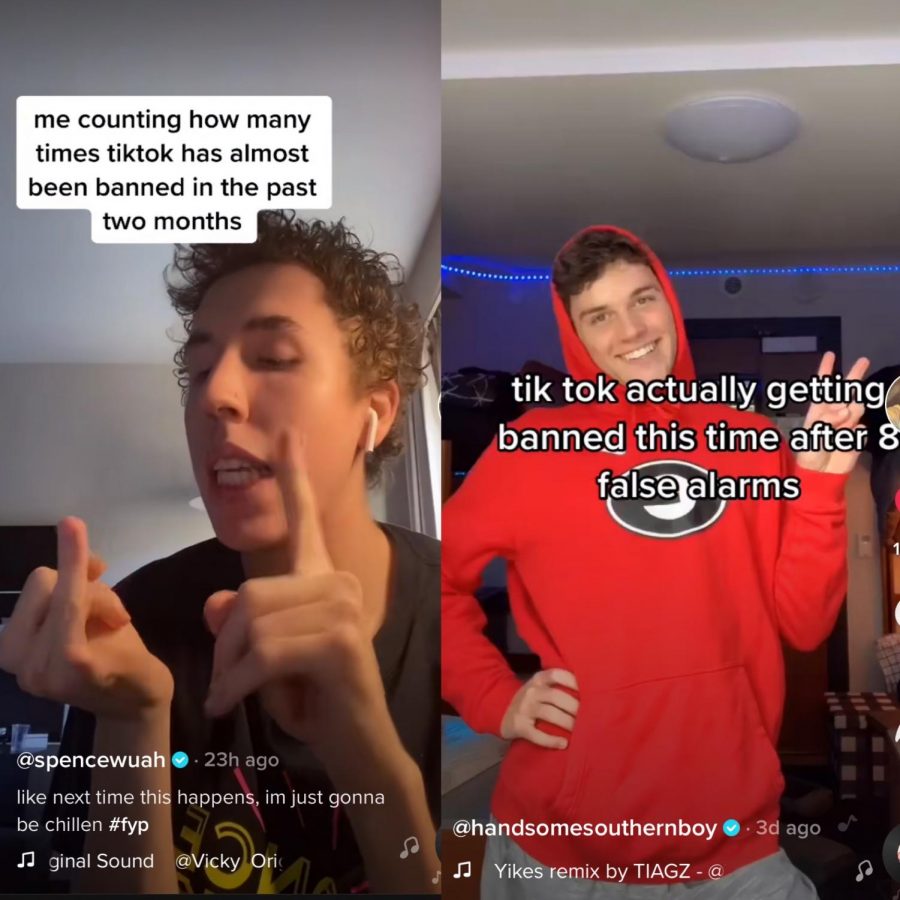 Screenshots of TikTok videos from @spencewuah and @handsomesouthernboy talking about the ban.

With over 700 million active users worldwide and more than 100 million users in the U.S. according to cnbc.com, TikTok’s popularity has increased dramatically since its launch in 2017. The app, known for dance trends, comedy skits, singing and more, offers an extensive platform for people to post and view a wide variety of content.

In early August, President Trump signed an executive order stating that TikTok would be banned in the U.S. unless ByteDance, TikTok’s Chinese owner, sold its operations to make it an American owned company. Although there has been speculation that Trump has a personal distaste for the app, The Trump Administration stated that the app is a national security threat, claiming that it’s been giving the Chinese Government access to American data.

The executive order generated a flood of posts about the ban throughout TikTok and other social media platforms, leaving many active users worried that they would never get to use the app again.

ByteDance began to explore partnership deals with various American companies in response to the executive order including Microsoft, Walmart and Oracle. However, the affairs quickly re-surfaced this month when the Trump Administration announced on Sep.18 that the ban would be placed on TikTok in the US effective immediately on Sep. 20. The news spread quickly and people began to post again about the situation on many platforms, causing it to quickly trend on both TikTok and Twitter.

The ban meant that TikTok would be taken off the app store in the U.S. beginning Sep.20 at midnight. Though the ban wouldn’t have prevented people with the app from continuing to post videos and interact with other users, it would have prevented people from being able to update the app, causing the possibility of various glitches for users.

As mania continued to spread across TikTok in fear that the app would shut down completely, this past Saturday, Trump gave preliminary approval to one of the proposed partnerships between TikTok, Oracle and Walmart, temporarily pushing the ban to Sep.27.

As stated in nytimes.com, Trump told reporters outside the White House on Saturday, “I have given the deal my blessing. If they get it done that’s great, if they don’t that’s fine too.”

In the new partnership, Oracle and Walmart own a combined 20 percent stake in TikTok while ByteDance owns the remaining 80 percent. This deal also makes TikTok a U.S. based company called TikTok Global. In addition, the global ownership is made up of 53 percent American investors.

Many high school students were patiently waiting to see what would happen with their favorite app. “I had a feeling that it wouldn’t be banned,” said WHS Senior Kaitlyn Duffy. “They said at earlier times that it might not be banned, so I just had a hunch that it would be like the other times.”

After originally approving the partnership, Trump stated on Monday that he wouldn’t allow any deal to take place in which ByteDance still owned a percentage of the app. In response to this, on Wednesday, TikTok filed legal action against the Trump Administration, asking for a preliminary injunction to prevent the ban from taking place this Sunday.

Currently, it’s unclear what may happen to the app. TikTok stated that banning the app in the U.S. violates freedom of speech and would cause a great amount of damage to the company. Though the situation continues to change, as of now, TikTok is still on the app store.

“TikTok is a great way for people to express ideas and come together on one platform,” said WHS Senior Bianca Popa. “It’s a really fun experience to be a part of and I would be sad if it got shut down because it’s a source of enjoyment for me and a lot of other people too.”