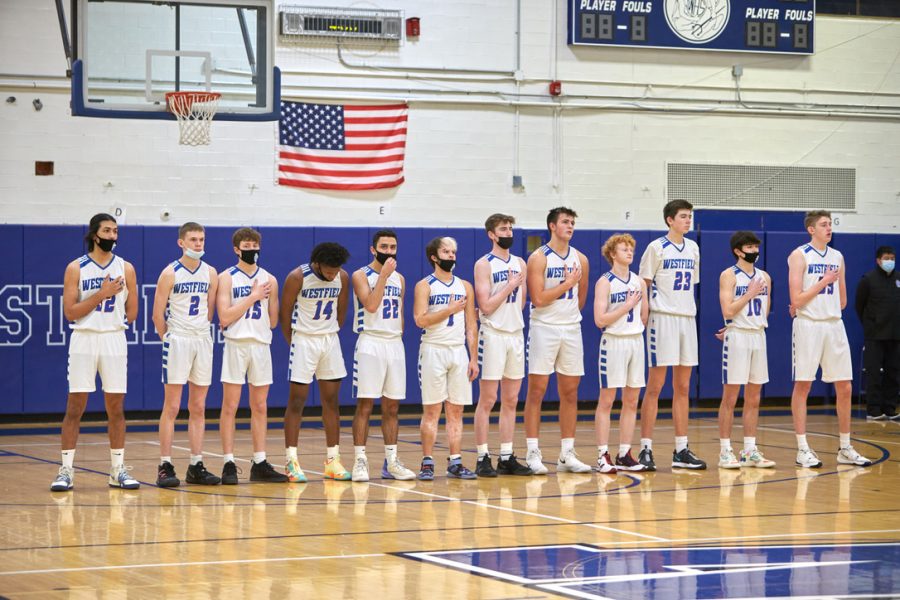 Seeing how many fall sports ended just as quickly as they began this year, the WHS Boys Varsity Basketball team went into their season not knowing what to expect. COVID-19 restrictions severely limited, not only the number of games that can be played but the atmosphere and dynamic of the game as well. A normal season would typically consist of 20 plus games, however with their last game at 4:00 pm today against New Providence, the team has a current record of 7-5. With these restrictions in mind, the team entered this unpredictable season with one simple goal.

“We really just wanted to play,” said WHS Boys Varsity Basketball Coach James McKeon. “So we kind of just took it one day at a time…get what we can get in and then enjoy the moment we’re there because in 20 minutes it could be ended and we always had that in the back of our mind.”

In order for the ability to play to even be possible, the team had to make sacrifices both on and off the court. “We had to be way more structured than [usual], the kids had to kind of isolate themselves to just the team itself,” said McKeon.

Senior Captain Jack Spellman said, “It’s been difficult not having bus rides and locker room discussions to bond as a team, but we’ve definitely supported each other and worked hard to follow strict protocols to have a successful season.”

The unpredictable changes and necessary sacrifices certainly made this year like no other. However, just being able to play at all was an achievement that was not guaranteed. “We’ve been able to complete a full season, we’ve been able to build a great bond as a team while quarantining together and we’ve been playing solid basketball since we started in January,” said Junior Captain Logan Howland. “It’s been an amazing experience playing with the guys and I wouldn’t want to play with anyone else.”

The team itself looked unique this year with only two seniors on the roster, which is typically low for any varsity sport. While low in numbers, the upperclassmen still have lots of influence on the team and want to leave their legacy in good hands.

“I lead by example through my commitment to the team, my hard work and my positive influence,” said Spellman. “I speak a lot with the younger players to share my basketball experience and knowledge to help prepare and encourage them for game situations.”
This encouragement did not go unnoticed or unappreciated. Sophomore Pete Meixner said, “The upperclassmen are amazing leaders and have helped me so much since I got here. They preach a winning mentality and I take in everything I can from them in order to benefit my game and our team.”

McKeon described how he looks for everyone to be a leader in their own way, not just the captains. Each player brings a different mindset and skill set that is valuable to the team and has the potential to impact each member.

Looking back on the season, Spellman said, “My takeaways were that I’ve developed a greater appreciation for the game and the time spent with my teammates because I learned as a result of the COVID pandemic it can be taken away at any moment.”