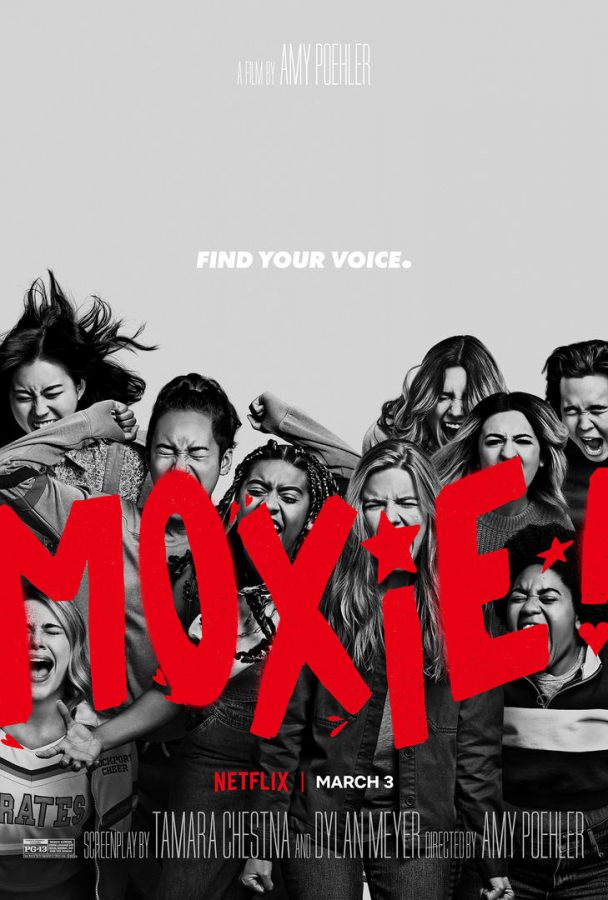 In a collaboration between Netflix and Amy Poehler, Moxie, originally a book by Jennfier Mathieu, was brought to the big screen. When 16-year-old Vivian starts to notice the way boys at her high school treat girls, in particular how football captain Mitchell treats new student Lucy, she becomes enraged at repeated sexist acts. In a fit of frustration and inspired by her mom’s days as a feminist activist in the ‘90s, Vivian creates an anonymous ‘zine called Moxie that she leaves in the bathrooms at school for students to find.

It doesn’t take long for Moxie’s popularity to spread and, with its popularity, a club and movement are created to carry out Moxie’s feminist agenda. Moxie touches upon unfair dress codes, rape, sexual harassment and many other issues girls in high school unfortunately face. Yet, with Moxie’s important focus on prevalent issues, the movie falls short in various areas.

First of all, the movie fosters a women against men ideology, presenting most of the boys in the movie as inherently unsupportive of the feminist agenda. While there are a few boys who support Moxie’s movement, like Vivian’s love interest Seth, it would have been better to not create such a stark black and white difference between the beliefs of the girls and boys in the school as it created ideas that could be detrimental to the feminist movement.

Then there is the issue with diversity. While Moxie has characters who are Black, Latinx, transgender, gay and handicapped, this inclusion of such diversity is not carried through properly. While it is to be commended that there is such representation, these characters are pushed to the side as the movie goes on, highlighting Vivian, a straight white female as the face of the feminist movement. Lucy, an Afro-Latina character who inspires Vivian to create the magazine and take a stand against unfair treatment, fades into the shadows behind the white protagonist. Similarly, when Vivian’s POC friends and club members get in trouble, Vivian, the white leader of the movement, stays silent.

For a movie that preaches a change in intersectionality from the feminist movement of the ‘90s, Moxie could have done a better job progressing the arc of these diverse characters and highlighting their unique struggles as part of the feminist movement. This failure is an unfortunate but common theme in Hollywood when filmmakers attempt to diversify plots and casting.

Yet, despite these areas that fell short, it would be a mistake to dismiss Moxie’s positive aspects. Moxie is humorous and a feel-good movie that can be enjoyed by viewers of all ages. Also, Moxie includes characters who bravely speak up against their abusers, which can inspire viewers at home to do the same.

So, overall did I enjoy Moxie? Yes. However, Moxie could have been improved with a more comprehensive consideration of what feminism is in the modern era. No doubt this movie marks a more inclusive casting and a step in the right direction for Hollywood, but it missed its potential to highlight more progressive feminism, drawing viewers’ attention to issues with which they might not be familiar.