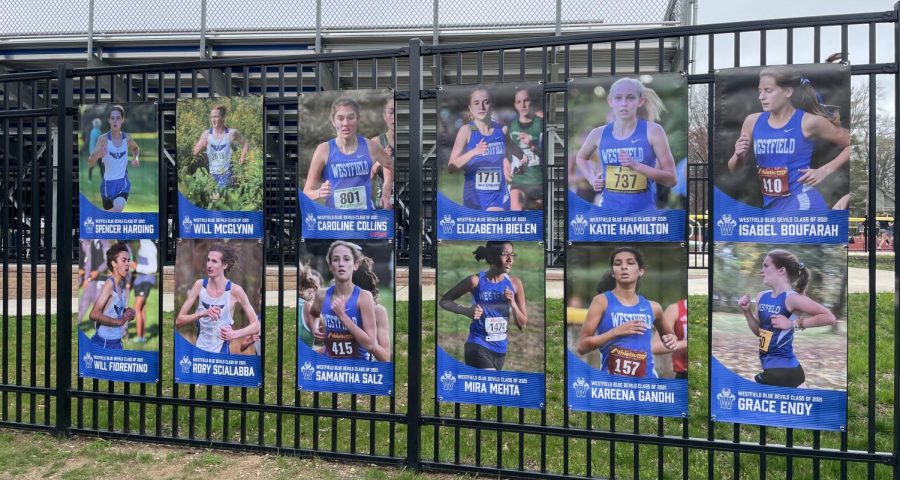 When driving by Kehler Stadium, it is hard to ignore the new posters commemorating senior fall athletes at WHS on the fence. Similar signs were put up last spring to recognize seniors who had their spring seasons drastically cut short due to the pandemic. Unfortunately, in their short time being up this year, many signs featuring WHS athletes have gone missing. What started as a celebration of senior athletes now has people feeling outraged and targeted.

According to Westfield Police Chief Christopher Battiloro, the theft was reported on the morning of April 11 and appeared to have occurred the night before. Signs depicting football players Johnny Heard, Daniel Shakal, Jack Luerssen, Drew Pink and Chester Maz were stolen.

Heard felt rattled after hearing about the crime. “I’m just confused why someone would want to steal my sign. Frankly, I’m kind of upset,” he said.

Fellow teammate Shakal also had his sign stolen. Shakal said, “I’m really angry someone would steal my sign and I really hope they catch the people who did this.”

According to Battiloro, a detective from the Westfield Police Department has been assigned to the case and will investigate video surveillance footage from cameras at Kehler Stadium and Edison Intermediate School. The theft falls under the category of a disorderly persons offense, since the amount involved was less than $200.00, and is punishable by up to six months jail time and a $1,000.00 fine. Currently, police are monitoring the area to prevent future theft.

Westfield resident and member of the Westfield School Boosters Association Jim Donofrio helped organize the banners and said, “It’s upsetting that these security steps have to be taken to stop this immature and meaningless act by individuals.” The five stolen banners were replaced, but unfortunately, one has been stolen for a second time within days of its renewal.

Pink, who has now had his banner stolen twice, stated that he does not feel the theft was a personal attack but he was confused why his sign was targeted. Maz shared a similar sentiment, saying that “[he doesn’t] feel attacked or scared, just very confused and curious where that sign is now.”

As the banners remain outside of Kehler, Battiloro reminds us to have respect for the personal property of others and remember the significance of this homage to WHS athletes. “Sports are such a big part of the Westfield High School experience, and this is a really great tribute to our student-athletes.”