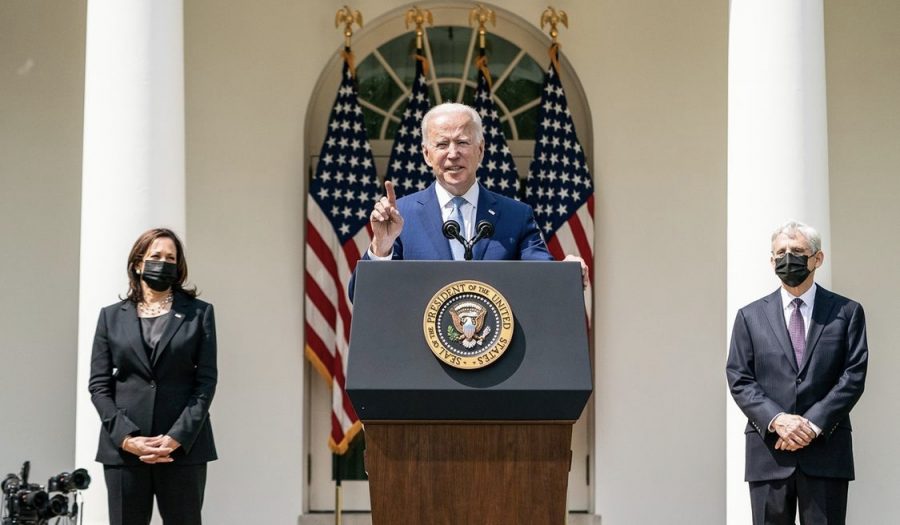 Biden speaking on gun violence prevention at the White House

On March 16, a gunman shot and killed eight people in the Atlanta area; six victims were women of Asian descent. This shooting raised questions about potential anti-Asian hate, which has been on the rise since the beginning of the pandemic.

On March 22, ten people were shot and killed in a grocery store in Boulder, C.O. The victims ranged from ages 20 to 65, one of whom included a 51-year-old police officer who was the first to respond to the scene.

On March 31, four people were shot and killed in a Southern California office building. The gunman knew all the victims.

Within 30 days, the Justice Department will issue an order to help prevent the spread of unregistered firearms known as “ghost guns,” as well as pistol stabilizing braces that transform pistols into more lethal weapons. Additionally, Biden will be publishing “model” red flag laws and is urging Congress to pass a national red flag law. Red flag laws allow guns to be taken away from people who present a danger to themselves or others and are one of the only gun laws that both political parties have been able to agree upon. Biden also called for increased support of community violence interventions which have been proven effective in reducing gun violence in urban communities.

On April 8, Biden delivered a speech regarding gun violence, stating that “gun violence in this country is an epidemic, and it’s an international embarrassment.”

Recently, on April 15, eight people were shot and killed at a FedEx warehouse in Indianapolis, IN, one of the 19 states that have red flag laws implemented. The shooter, 19-year-old Brandon Hole, had a shotgun seized from his home last March when his mother raised concerns about his mental state. Though it seemingly solved a short-term problem, Hole was able to legally purchase rifles a year later, allowing him to fatally kill multiple people as well as himself.

Many people acknowledge that there is still a lot more action that needs to be taken, with a recent poll on ipsos.com finding that 57 percent of Americans disapprove of the way that Biden is handling gun violence.

Though there is division among Americans regarding Biden’s executive action, many expressed their support for the president. On April 8, U.S. Rep. Stephanie Murphy Tweeted, “I applaud @POTUS for taking strong action to stop the deadly drumbeat of gun violence in our communities. Now the Senate should pass legislation we’ve already passed in the House to keep the most dangerous weapons out of the hands of the most dangerous people.”

Similarly, WHS senior Reva Patel said, “The most we can do right now is continue to educate each other. [Biden’s Executive Actions] aren’t a permanent solution, but it’s definitely making a great start.”