The fans have saved European football… For now 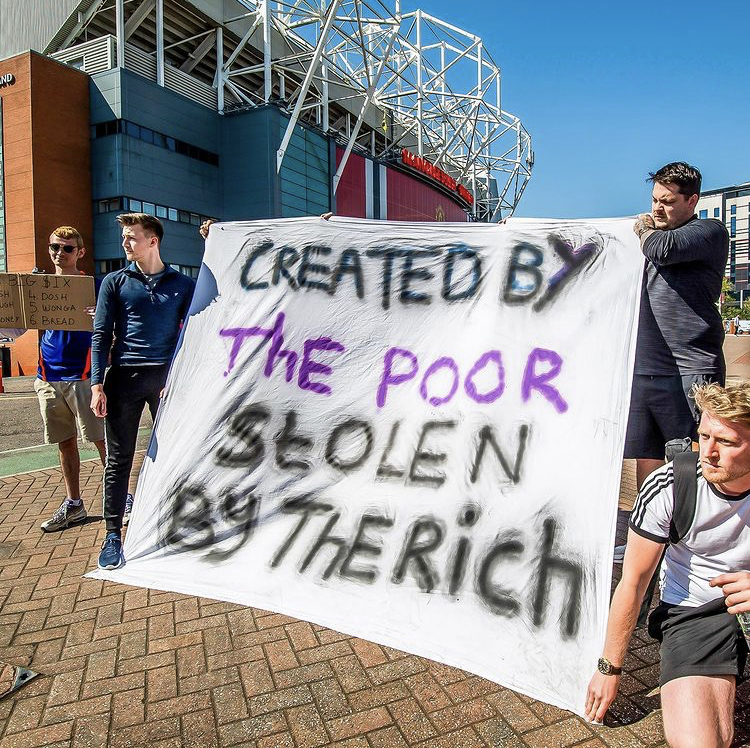 On April 18, the twelve founding clubs of the new European Super League announced their proposal to create an annual competition including the richest soccer teams in the world, bypassing the UEFA Champions League as Europe’s top footballing competition. The proposal planned for three additional teams to join the founding members with up to twenty teams competing in any given year. The competition was tentatively set to commence in August.

There was strong opposition to this new formation as UEFA, the governing body of European football, and FIFA, the international federation of football, both put tremendous pressure on the 12 Super League teams (Manchester United, Liverpool FC, Tottenham Hotspur, Manchester City, Arsenal FC, Chelsea FC, FC Barcelona, Real Madrid, Atletico Madrid, AC Milan, Inter Milan and Juventus), by threatening to ban the teams from their domestic leagues, the Champions League and even going as far as banning the teams’ players from competing in international competitions with the European Championships this summer and the World Cup just over a year away.

While we Americans are used to seeing the world’s best teams in the NFL, NHL, MLB and NBA play each other every week, this is not the case in European football. Teams are subjected to relegation into a lower division should they finish toward the bottom of the league standings and can only qualify for the toughest competitions in Europe by finishing higher up in the league.

This proposed Super League would have been a locked league structure, turning football clubs into franchises as opposed to teams competing for a place, causing outrage from fans of the entire football world, even fans of the teams in the Super League.

This outrage was much anticipated and deserved, as football has more than four billion fans across the world, a majority of the planet’s population. In the continental birthplace of the beautiful game, Europe, football and community are one and the same. For the culture of the sport to be hijacked by an oligarch of elites and treated so obviously like a business would be a direct attack on the people’s game. Soccer in Europe was never supposed to be about commercialization, and the Super League seemed like it could have been the tipping point of the end of what makes football great.

Each team in Europe, including the twelve teams comprising the European Super League, has a rags to riches foundational story unique to their own community. For them to go out and create a monopoly of the game of soccer, depriving the rest of the continent of fulfilling the ability to compete, is a disgrace to the world’s most beloved sport.

Not only would this have destroyed the meritocracy in European football, but the Super League could have destroyed communities economically, as rich clubs going off and creating their own league at the rest of their countries’ expenses potentially forces their countries’ entire football systems, professional and semi-professional leagues, to lose their biggest financial contributors and sponsorship targets. This was especially disgusting from the owners in the midst of a pandemic, which had been causing teams and communities to suffer economically, relying on help from the richer clubs.

The reaction from the fans was expected, as millions of people from around the world vehemently opposed the Super League proposal, despising the twelve club owners for caring more about revenue than the sanctity of the tradition of the beautiful game. The day after the Super League announcement broke, fans poured out into the streets around the stadiums and training grounds of each of the twelve teams involved to protest the clubs’ owners.

As of Hi’s Eye deadline, Atletico Madrid, Inter Milan and AC Milan have all joined the English clubs in withdrawing from the Super League, with FC Barcelona, Real Madrid and Juventus declaring they will remain.

Even though Real Madrid President and Super League Chairman Florentino Perez claims that the English teams can’t leave the Super League and it will go on as scheduled, the plans to start the league have been officially suspended.

The fans have successfully shown that football still belongs to the people and not the rich, even though the sport has become increasingly monetized over the years.

In the end, the Super League lasted no more than 48 hours, but even that was too much. The robber baron owners will never be forgiven and their actions will not be forgotten.

Resignations are imminent, fans are still rightfully furious and a plethora of issues continue to plague European football like racism and corruption within UEFA and FIFA, but for now, it seems like the integrity of the game has been saved.