How Hi’s Eye Staff would spend a ‘Day Off’ 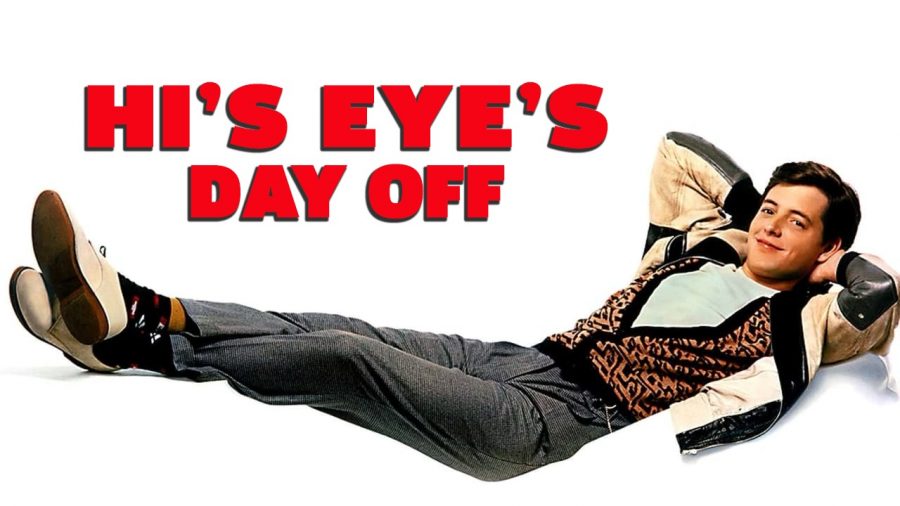 35 years ago, the world was introduced to the coolest high schooler in the world: Ferris Bueller. Overcome by the stress of school, Bueller decided he needed a break and took the matter into his own hands. He spent the next eight hours exploring downtown Chicago in a vintage Ferrari, visiting the Sears Tower, Wrigley Field and the Art Institute of Chicago, before spontaneously jumping on a parade float and covering the Beatles.

The beauty of Ferris Bueller is that he shows every high school student how important it is to take a break from the challenges of being a teenager. Throughout the film, Bueller talks about how all of the adults in his life are causing him anxiety and all he wants to do is outsmart them and have a good time while doing it.

As our time at WHS winds down, and after nearly 14 months in a global pandemic, it is more important than ever for high school seniors to understand that “life moves pretty fast. If you don’t stop and look around once in a while, you could miss it.”

With this in mind, the staff compiled a list of their go-to day off activities once the pandemic is over.

Will McGlynn – It’s beautiful out so I would take the squad and go cliff diving. Nothing feels better than jumping off a cliff into water.

Caroline Collins – I would get coffee and bagels with my friends and then we would go for a sunrise hike and go swimming after.

Kerry Donovan – I would take a trip to NYC for the day with my friends.

Megan Hinkel – I would spend my day off by spending the day at the beach with friends.

Laura Channell – I would go to New York City with my close group of friends and go bungee jumping and to the top of the Empire State Building.

Charlotte Dursee – I would drive down the shore and spend the day on the beach reading, eating, tanning and playing spikeball.

Caroline Bielen – If I had a day off, my friends and I would spend time together to watch movies and eat a lot of cheese balls.

Aidan Morrison – Chill at home with my dog.

James Birle – I would go to the city with my best friend, driving around, hitting the shops and wasting way too much money. We would then try to talk to as many people as possible before sneaking into a very high-end restaurant as Abe Froman, the “Sausage King of Chicago.” Then, we would spend the rest of the day at my friend’s pool, just listening to music and relaxing.

Claire Campbell – I would go for a long hike at sunrise with my friends and our dogs and then we’d drive down to the Delaware Water Gap blasting music with the top down in my friend’s convertible. We’d go tubing down the river for a few hours and then drive home. We’d put on sundresses and get all dolled up to go over to someone’s house to make a really nice dinner together. Then we’d go to a concert at PNC (preferably Rihanna or Doja Cat) and dance the night away.

Katherine Wistner – I would spend my day off at the beach. I would wake up and watch the sunrise, then probably go back to bed for a while. After that, I would get breakfast, pack up my things and spend the rest of the day at the beach. I would swim, tan, read and just relax. Finally, I would end the day with a picnic at the bay watching the sunset (and maybe get some ice cream.)

Jake Holtzman – I’d go down to the shore and spend a day at the beach.

Noah Metz – The first thing that I would do is go to Russ and Daughters, one of the most famous bagel places in NYC. I would order an everything bagel with whitefish salad, lox, egg salad, and a slice of muenster cheese on one half, and swiss on the other. Eating while listening to the russian and yiddish spoken there is an incredible experience. Then, I would catch a 1:00 p.m. Mets game. Given the fact that it is the Mets, they would probably lose. No bother, as this is typical procedure as a Mets fan. To finish off the day, I would drive down to Wildwood and have dinner and hang out on the beach. Ignoring the countless hours of driving, this would be my perfect day off.

Sammy Salz – New York City is my favorite place in the world,  but unfortunately, I haven’t been able to visit since last year. On my day off, I’d take the train to NYC with a few of my close friends so that we could eat at my favorite restaurants, head uptown to shop, and explore until the minute we have to catch the train home!

Lily McGuire – I would go to the beach and have a picnic with my friends.

Chloe Shanebrook-Wein – I would drive to Ocean Grove with my friends and spend the entire day at the beach. Then eat Korean fusion tacos for dinner.

Stephen Kirby – I’d probably go to a concert because I have never been to one. I had plans to go to one last year, but it was canceled because of COVID.

Sammy Salz – New York City is my favorite place in the world,  but unfortunately, I haven’t been able to visit since last year. On my day off, I’d take the train to NYC with a few of my close friends so that we could eat at my favorite restaurants, head uptown to shop, and explore until the minute we have to catch the train home!

Kaitlin Bavaro – I would first get up early and then go to Six Flags right when it opens, which is 10 a.m. I would hit all of the important rides by noon (which I know is possible because I’ve done it before). I would then go to a fancy restaurant in New York City for lunch with rooftop dining, then I would go shopping. For dinner, I would go to Long Branch and get seafood there. I would finish off the evening swimming in the ocean. I would also travel to all these locations in a limo, just because.

Katie Hamilton – During a normal year, if I were to skip school I would go to Penn Relays in Philadelphia to watch the [track] meet.

Jessica Isser – I would spend my day off in the city with my friends where we would go out to brunch on an outdoor rooftop and then walk around the streets of NYC. We would end our day with cookies from Levain Baker and pictures in Central Park.

Julia McGann – I would rent a beach house with my friends and spend my day doing different activities like tanning, shopping and going out to dinner.

Jeremy Kornfeld – Going to the beach with a bunch of my friends.

Nate Lechner – I would start the day by “borrowing” a sports car before driving it into the big city. Once there I would spend a couple of hours exploring the various landmarks of NYC and hopefully learning a little bit about myself along the way. On the way out I will join whatever local parade is going on and belt out a glorious rendition of “The Power of Love” by Huey Lewis