We Are The Champions: Westfield’s Historic Soccer Season 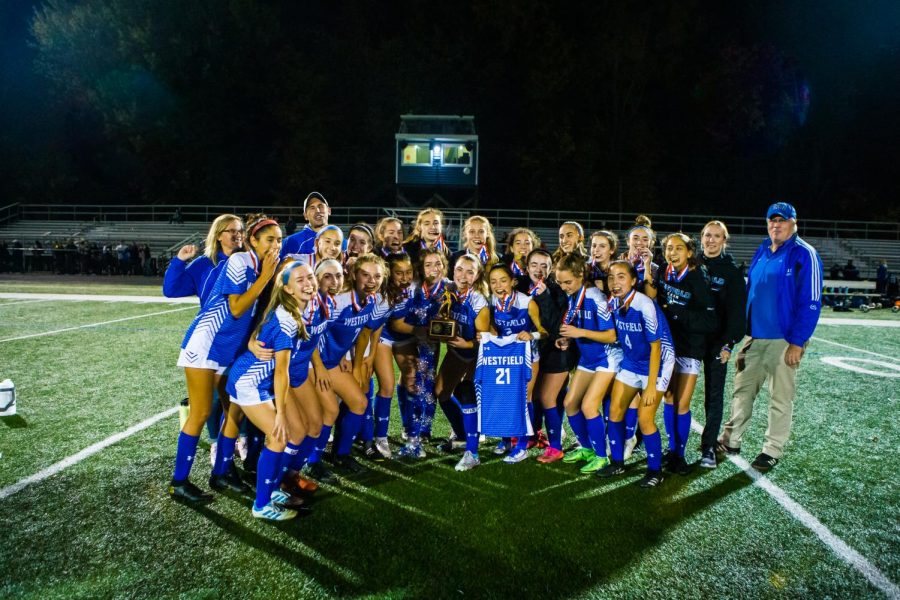 The girls soccer team after defeating Scotch Plains on Oct. 30 in the Union County Championships

The WHS soccer programs have displayed nothing short of excellence this fall. The 2021 season is shaping up to be the best all-around season ever for Westfield soccer, as it is the first time that the boys and girls varsity teams won the Union County Championship in the same season.

The boys concluded their season with a record of 14-4-1 after a second-round loss in the NJSIAA Tournament to Hunterdon Central on Nov. 8. However, Westfield soccer still prevails as the girls won their first State Sectional Championship since 1988 on Nov. 12. With a record of 19-0-1, the girls are not only ranked number 2 in the state, but also a top 20 team in the nation.

The girls have had an amazing season led by Wilson Elementary School Teacher Alex Schmidt. “This season is what every player and coach dreams about having. In fact, I think this team has far exceeded the coaching staff’s preseason goals. We knew we would be talented, but that doesn’t always translate in wins or championships,” said Schmidt. However, it most certainly translated into championships as the girls won their first outright Union County championship in over 20 years, having only ever been co-champions during that time.

“I think this season is going extremely well and I’m so proud of what the team has accomplished. Coming off of an eight-game season and constantly getting shut down because of COVID-19, I think we really wanted to play [well] for the seniors last year who didn’t get the chance to have a regular season,” said WHS junior and Rutgers soccer commit Alyssa Martinez.

Led by Head Coach Eric Shaw, the boys team was able to recapture their first outright Union County Championship since 2016. “Winning the county final was one of the greatest moments of my soccer career. The atmosphere, the energy and the outcome of the game were just perfect. I will never forget that moment when the final buzzer went off,” said senior captain and Cornell soccer commit Ryan Freidberg.

In order to achieve these results, Coach Shaw prioritized the journey to get there. “The process is an everyday thing; doing all the little things to the best of your ability, showing up, working hard and competing,” said Shaw. A factor that sets this soccer program apart is their push for team chemistry.

“One of the reasons we travel to New York for a few days [each season] is to develop that team bond. This helps build trust within the team which means less conflict and increased collaboration. And a team that knows how to collaborate, knows how to win,” said Shaw.

Both the girls and boys teams also incorporated yoga into some of their practices this year. With the stresses that come with sports and school, this served to be beneficial for the mindset of the players and clearly seems to be paying dividends on the field.

The 2021 Westfield soccer programs have had one of the most successful seasons ever. These athletes have reenergized the fan base and made Westfield proud.