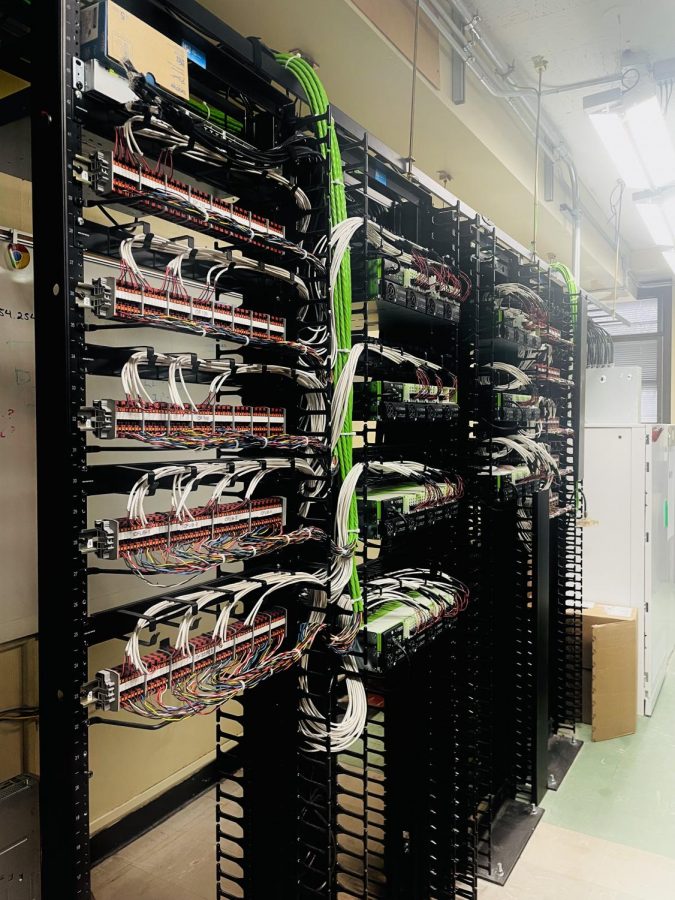 With so much instruction at WHS moving online since the pandemic, students are using technology in school more than ever. This has created an increased reliance on the school Wi-Fi network, which has raised questions about privacy, security and connectivity speeds. With the many rumors and misconceptions floating around the building, it is vital to understand the technology at WHS in order to get the most out of it and stay protected.

Many students at WHS have Virtual Private Networks, also known as VPNs, which are applications downloaded onto their personal devices to access blocked websites and apps during school. According to Norton.com, “A virtual private network (VPN) gives you online privacy and anonymity by creating a private network from a public internet connection. VPNs mask your internet protocol (IP) address so your online actions are virtually untraceable.”

An anonymous senior uses a VPN to access Snapchat, an app that is blocked by the district. “I like to stay in touch with my friends throughout the day and so I use the VPN,” they said. “Pretty much everyone I know has a VPN too.”

Freshman Lizzie Miles said, “I don’t personally have a VPN, but a lot of my friends have them and they have suggested that I get one too.”

However, many students do not realize that VPNs are against school policy, and suspensions are a possible punishment if the administration decides to take action. Parents sign an agreement on Genesis at the beginning of the year that states, “Violations of the Acceptable Use of Computer Networks, Computers, PEDs and Technology Resources Policy and Regulation may result in a loss of access as well as other disciplinary or legal action.”

The stipulations also link to Board of Education Policy 2361, The Acceptable Use for Computer Network, Computers, Personal Electronic Devices and Technology Resources. This policy further outlines the district’s rules about use of technology, what school data is accessible to the public, individual internet privacy protections, consequences for breaking the rules and other information.

District Chief Technology Officer Brian Auker explained why these rules are in place. He described that there are different filters put in place at the discretion of the administration to maximize every student’s ability to get the best education and protect against seeing inappropriate or graphic content, as well as cyberbullying.

Outlined on Genesis, filtering gets gradually more restrictive with elementary, then middle, then high school, respectively. This is to protect students based on what the school deems inappropriate for their age (Auker’s examples of blocked content included war, hate speech, etc.), but as students get older, their needs and awareness changes, and so does their internet access. The district is required to have such filters by law under the Neighborhood Children’s Internet Protection Act.

However, many students are unaware of this policy because their parents sign the consent form for them, and in the past, the administration has not chosen to discipline those who have VPNs. “I did not know that having a VPN is against school policy,” said WHS senior Matthew Lynch.

Auker and the technology department has created a secure system to protect the data of students, teachers and staff as much as possible. He explained that when students use VPNs, they bypass the security measures of the school network, which could make students vulnerable to getting hacked. “If you stay in your lane and use the protocols we have here, and you don’t circumvent them with a VPN, then you have some protection. But, when you use a VPN, you can give all of that up,” he said. To address this, different Wi-Fi networks have been created within the school.

Due to these different networks, if a student who uses a VPN introduces malware (software used to hack or damage a computer system) to the student Wi-Fi network, the effect is not detrimental to the system as a whole. This is because the spreading of the virus is stopped, as there are “walls” that cannot be passed between student, teacher and district staff Wi-Fi networks. Auker said, “If someone is using a VPN and they bring a virus into their machine, it starts looking for other devices on the Wi-Fi network to also infect, which only hurts other students.”

School districts nearby, such as Livingston and Hillsborough, and even Rutgers University, have been forced to pay ransom money to hackers in the past after their networks were hacked, which have cost the schools upwards of tens of millions of dollars. If similar problems come from an individual student bringing in ransomware or malware from a VPN, they are liable for the financial costs.

However, Auker said that VPNs still serve a purpose outside of school. “VPNs certainly have their place and I would strongly recommend you use it when you go to a public area, such as Starbucks. A local Starbucks does not care about security and you have so many people there that there might be somebody at Starbucks actually trying to hack devices that come in on the Wi-Fi and there is no security on the Wi-Fi there that is protecting you.”

Some students and teachers also have privacy concerns and have different ideas about what information the school has access to when using school networks and devices. Miles said, “I feel like the school computers in particular could be giving the school access to your information… I’ve used my personal computer for the past few years, but when I do use the school Wi-Fi or computers, I use a private browsing window.”

Lynch added, “While I don’t think that the school would or could use the Wi-Fi to track my activity on my device, I am always cautious of this possibility. I have definitely considered this idea before and I try to use websites that are academically beneficial while in the building.”

However, Auker explained that the belief that the district has access to your personal information is completely untrue. “I’ve heard from some students and even teachers that they are concerned about their own privacy rights and that if they bring their own devices on the Wi-Fi, we can see their pictures or text messages or emails. That is not the case. We don’t have anything like that.” He also said, “I’m just worried about trying to keep the network running and doing the one thing we’re here for, educating the students.”

Although no information can be obtained through the Wi-Fi network, information in the school-issued google accounts is not private. According to the Google Privacy Policy, domain administrators can “access and retain information stored in your account, like your email.” This can include, but is not limited to, documents from Google Drive or search history.

While the Wi-Fi is not a concern for privacy at WHS, students should be aware that some universities have different security measures. According to The Washington Post, “Dozens of schools now use such technology to monitor students’ academic performance, analyze their conduct or assess their mental health.”

One anonymous sophomore stated, “On our phones we can’t really do anything. No texting, calling or using social media. It is also bad on our computers. It takes forever to connect or sometimes it doesn’t connect at all.”

WHS Spanish Teacher Maria Garcia explained how the teaching is more difficult because of the connection issues. “When the class is doing an activity online, half of the class is connected while the others are still trying to get onto the server. This causes a lot of lost time of instruction.”

Auker explained that the Wi-Fi system is very complex and that its set up is currently for maximum, high speed connection for everyone. There are access points in all of the hallways, classrooms and offices; multiple access points in large spaces (gym, library and auditorium), and some access points outside in the courtyards that are designed to handle many different devices, both school-issued and personal, with maximum coverage. These access points then connect to various network closets throughout the building.

He emphasized that any problems with the Wi-Fi network or access points are short-lived, as the technology department swoops in quickly to fix the problems. Auker said, “The assistant network manager, Joseph Marateo, is in the library upstairs and he’s here on site if something happens,” and, “If we determine that the access point is down, we are able to come in with a spare and replace it.”

Auker said that the technology department emailed step-by-step instructions on how to properly connect to the Wi-Fi before the school year began, which students should utilize to ensure that they are not connected to the wrong network. To access these instructions, students can check their school email, or they can go onto the Technology Department website through the district website, then click Instructional Technology, and then Wi-Fi Directions. In addition, students can visit the library for assistance from technology department staff before or after school.

In addition to these instructions, students can improve their connection by making sure that they only connect to WPS-CONNECT while at school. If they have ever connected to WPS-GUEST before, they should click “forget forever” in the network settings. Additionally, regularly updating personal devices and shutting them down at the end of the school day will help students connect to the right network.

Auker also mentioned that the technology department has been advocating to the BOE for a completely updated Wi-Fi system to be put in place. He said that while WHS recently updated their system, it is a priority for them to have the best Wi-Fi possible and keep up as new technology is created, but he does not know when the district will allocate the money for this huge project.

Until then, students can benefit from the current system by using all of the resources provided to improve their internet speeds, while understanding the security and privacy features.