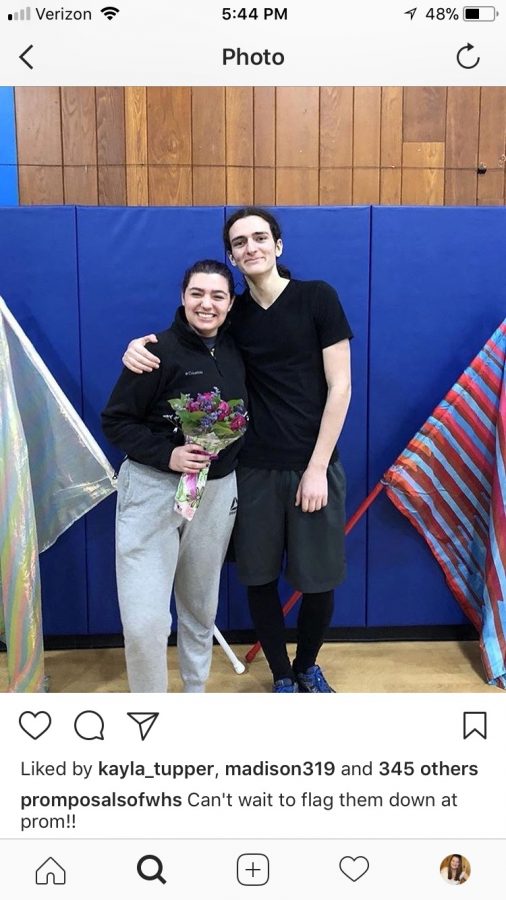 Anna Glueck and Robert Federico celebrate their promposal on Instagram

It’s Friday night and hundreds of WHS students are scrolling through Instagram. As they are bombarded with numerous promposal pictures, it’s become second nature to judge punny captions and this year’s couples. But they don’t think twice about what goes on behind the scenes.

As tomorrow’s prom rapidly approaches, more and more students have scrambled to find dates causing promposals to skyrocket. For most the stress ends with a corny sign, flowers and a quick photo-op. For three seniors who run the Instagram account @promposalsofwhs, however, that’s where the stress begins, stemming from the different voices of their 1,648 followers.

“Yeah, yeah, a lot. A lot of stress,” said Account Manager A, a female senior at WHS, whose name has been withheld as the owners of @promposalsofwhs are traditionally anonymous.

Account Manager B, another female senior, adds, “It takes a lot of time to come up with good captions and people are very picky, like it’s not good enough. We have a life; we have other things to worry about.”

“It’s a love-hate relationship,” Account Manager A explained. “It’s more stressful but in the long run, we get to be like, ‘Hey, that was me.’ I really can’t tell you how stressful it is, though.”

Those on the other side of the screens experience similar stress as well. When it comes to asking a potential date to prom, the Instagram account tends to over-complicate the process and cause unnecessary conflicts. When asked about the issues caused by social media and prom, senior Mia Melao responded while laughing, “How long can I talk for?” She described a situation in which her friend planned to ask a girl to prom, but then discovered on Instagram that she was already taken—a common issue when technology is the backbone of prom.

In addition to prom dates being “stolen,” the stakes of running out of creative promposal ideas are high with the presence of social media. “It can be helpful in a way to eliminate [ideas], but also stressful,” senior Rob Brown said. “I can’t do one with a dog anymore because that was used like seven times. You can’t do anything from last year.”

While the account can make it difficult for those planning to prompose, those waiting around to be asked find its presence overwhelming. “The Instagram account just basically pops in your face like, ‘Look who got a date, look who got a date,’ ” senior Jessica Stern said. “I think it’s a cute concept to be like, ‘These people are going to prom together,’ but when you’re stressed, it’s bearing down on you.”

Along with the expectation of posting on Instagram, modern-day promposals require another key component—“scheming,” also known as desperately texting to secure dates. Senior Emma Jackler explained: “Now everyone texts each other’s friends to find prom dates…which has definitely impacted the way prom works out.”

Stern recalled her first-hand experiences with scheming. “I would stay up late texting people just like, ‘Do you know who you’re going to prom with?’ or ‘Do you want a date?’ ” she said. “It’s easy for people to ask things on social media or through text, but in person saying, ‘Do you want to go to prom with me?’ is a lot scarier.”

The stress does not end with the promposal itself, as social media heightens the anxiety surrounding another issue—what to wear. A Facebook group (this year’s is made up of 251 WHS senior girls) is created every year for one purpose only: to post prom dresses as soon as they’re bought, so no one else can buy the same one.

Senior Caroline Stockwell found that the Facebook group, like the Instagram, spurred needless drama. She found a dress that was perfect for her, but did not post a picture immediately. To her surprise, another girl posted that same dress on Facebook the next day. “I was really mad because I literally just got it the day before,” Stockwell said. “I have friends who had theirs for months and hadn’t posted it yet, but nobody stole their dresses. I literally had it for 24 hours and it got stolen.”

The negative side of the Facebook group extends beyond conflicts over dresses and into an exclusive platform for judgment. Stockwell described how her friend, who had moved away from Westfield, was accidentally added into the group. One night, as a joke, this friend posted a picture of her prom dress with a caption threatening others not to take it. Other girls misinterpreted the joking nature of the post because it was on social media, and a feud erupted over who had the right to post their dress.

According to the study “Teens, Technology, and Friendships” conducted by the Pew Research Center in 2015, 68 percent of teens say they frequently or occasinally see people stirring up drama on social media. And for the WHS Facebook group, the case is no different. “Facebook can hurt people’s feelings and create conflicts that do not need to arise from the situation,” Stockwell said. “People misinterpret things and get carried away when they are hiding behind a screen.”

Technology’s influence on prom stretches further than the desire for picture-perfect dresses and into a need for impeccable appearances and promposals that, according to Jackler, “over one thousand people are going to see.”

Melao explained the pressure to be perfect in the presence of prom technology: “I keep saying if I don’t look absolutely flawless at prom, then I’ll be miserable,” she said. “It’s so easy to be judgey about other people, then you realize they’re going to do that to you.”

From @promposalsofwhs to Facebook to scheming over text, technology has completely taken control of prom at WHS. “In this day and age, it’s inevitable for technology to be incorporated into this event,” junior Emma Hamilton said. “I think that technology heightens the craziness of prom, which is already such a stressful event, because people put so much pressure on themselves for it to be a perfect experience.”

Ultimately, pictures go hand-in-hand with every aspect of prom, beginning with the promposal and ending up as validation of the prom experience. “When people are proposed to, the first thing they do is set up for a picture,” junior Sydney Harding explained. “And if someone’s not there with a camera ready, they feel uncomfortable. Because they need a picture.”